Mast cells and eosinophils are found at the internal/external interfaces of the body, in particular at mucosal surfaces, surrounding blood vessels, and in close proximity to peripheral nerves. They produce a broad range of inflammatory mediators including vasoactive amines, bioactive lipids, proteases, cytokines and chemokines and express many immunologically important cell surface receptors. As a result, they are involved in both innate and adaptive immune responses, and participate in both acute and chronic inflammation. Because of the inflammatory mediators they release and their ability to recruit and activate other immune cells through expression of chemokines and cytokines, mast cells and eosinophils are believed to drive symptoms in a number of diseases. Agents targeting eosinophils or mast cell receptors or secretion products have shown utility in the treatment of a number of diseases including chronic urticaria, atopic dermatitis, severe asthma, chronic rhinosinusitis, eosinophilic gastrointestinal diseases, indolent systemic mastocytosis, highlighting pathogenic roles of these cells. By targeting inhibitory receptors on mast cells and eosinophils Allakos is seeking to produce drugs with advantages over agents that target a single secretion product or receptor pathway.

Mast Cells and Eosinophils are Key Drivers of Inflammatory Disease 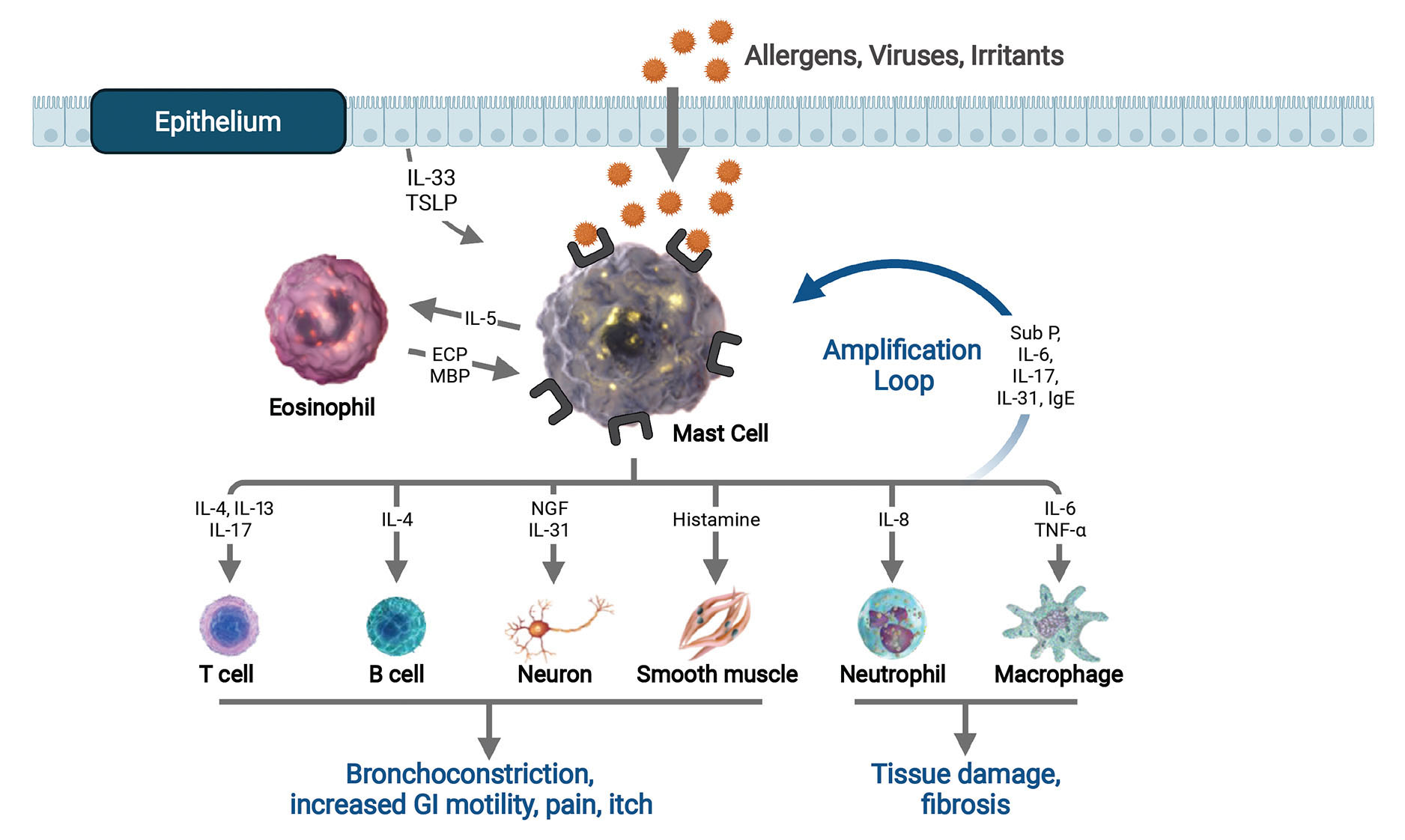 Lirentelimab is an afucosylated, humanized IgG1 monoclonal antibody which activates the inhibitory receptor Siglec-8. Additionally, lirentelimab depletes eosinophils via antibody dependent cellular cytotoxicity (ADCC) in blood. Siglec-8 is a member of the family of cell surface receptors called Sialic acid-binding immunoglobulin-type lectins (Siglecs). Siglec-8 is found on the surface of mature mast cells and mature eosinophils, and therefore offers a way to selectively target these two cells. Siglec-8 exerts its inhibitory signal through an intracellular portion of the protein called the immunoreceptor tyrosine-based motif (ITIMs). TIM bearing receptors, like Siglec-8 and Siglec-6, antagonize activating receptors and consequently have important roles in regulating the immune system. The inhibitory function is derived from the ability of the ITIMs to recruit SH2 domain-containing phosphatases which work to oppose activating signals driven by kinase signaling cascades. Disrupting kinase signaling cascades has been a successful strategy for treating inflammatory diseases as evidenced by approved drugs which target JAK, KIT, BTK, SYK, and others. However, often these kinase signaling pathways are active in multiple cell types, which can result in unintended side effects when disrupted. Because Siglec-8 is only expressed on eosinophils and mast cells, the inhibitory effects of lirentelimab are selective for these cell types.

Lirentelimab depletes eosinophils and inhibits the activation of mast cells

In human clinical studies, lirentelimab depleted blood and tissue eosinophils. In vitro and in vivo studies have shown lirentelimab can inhibit multiple modes of mast cell activation including IgE/FcεRI, IL-33/STL2, Substance P/MRGPRX2, and TLR3. Lirentelimab has shown encouraging evidence of effect in an open label phase 2a trial in patients with chronic urticaria. In this trial, patients enrolled had chronic spontaneous urticaria (CSU) despite treatment with up to 4x the labeled dose of antihistamines. In the omalizumab naïve cohort, patients who received monthly lirentelimab for six doses reported a 75% improvement in the 7 day urticaria activity score (UAS7) with 92% of patients achieving a urticaria control test (UCT) score ≥ 12.

In addition, patients were enrolled who had urticaria symptoms despite treatment with antihistamines (up to 4x labeled dose) and treatment with up to 600 mg (2x highest labeled dose) omalizumab for an average duration of 10 months. In the omalizumab refractory cohort, patients receiving monthly lirentelimab for 6 doses reported a 61% improvement in UAS7 with 57% of patients achieving a UCT score ≥ 12. Subcutaneously lirentelimab is currently being tested in phase 2b clinical trial in patients with chronic spontaneous urticaria, data from this study is expected in the second half of 2023. 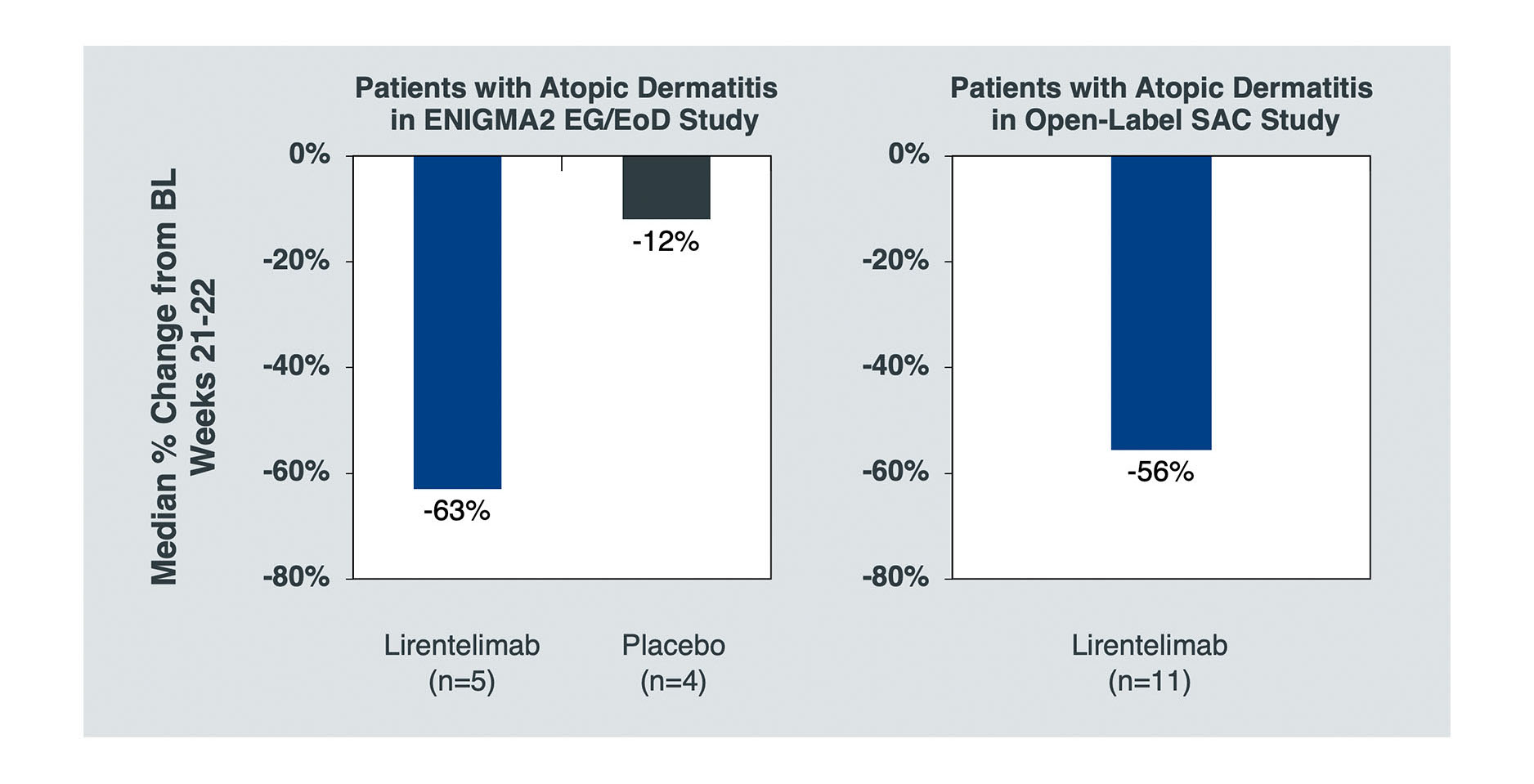 Subcutaneously administered lirentelimab is currently being tested in phase 2b clinical trial in patients with atopic dermatitis, data from this study is expected in the second half of 2023.

To date, intravenous (IV) lirentelimab has been administered in more than 750 patients, and with more than 300 patients exposed to one year. Lirentelimab has generally been well-tolerated in each of our clinical trials. The most commonly reported adverse events with intravenous lirentelimab administration has been mild to moderate infusion related reactions (IRR), which occurred mostly during the first infusion. IRRs are commonly associated with IV administrated ADCC antibodies.

Like Siglec-8, Siglec-6 is a member of the family of cell surface receptors called Sialic acid-binding immunoglobulin-type lectins (Siglecs). Siglec-6 is found exclusively on the surface of mature mast cells, and therefore offers a way to selectively target mast cells. Similar to Siglec-8, Siglec-6 also exerts inhibition through its intracellular ITIMs. AK006 is a humanized IgG1 monoclonal antibody which activates the inhibitory receptor Siglec-6. AK006 is directed to an extracellular epitope of the Siglec-6 receptor that was identified for its ability to generate strong inhibitory signals to mast cells. Furthermore, AK006 was engineered to have high residence time on the surface of the cell. As a result, AK006 provides deep inhibition of mast cells, even more so than lirentelimab. In addition to inhibition, AK006 reduces mast cell numbers via antibody-dependent cellular phagocytosis (ADCP) in the presence of activated macrophages. Because Siglec-6 is only expressed on mast cells, the inhibitory effects of AK006 are selective for mast cells.

Allakos expects to begin in-human studies in the first half of 2023 in healthy volunteers and subsequently in patients with mast cell driven diseases.

In proliferative diseases like cancer, blocking immune inhibitory checkpoint receptors can restore the immune system’s ability to identify and kill tumor cells. Therapeutics that target T cell checkpoint receptors, such as PD-1 and CTLA-4, or their ligands, were the first to demonstrate meaningful anti-tumor activity by blocking immune cell inhibition (i.e. removing the brakes on the immune system). More recently, ‘don’t eat me’ signals, such as CD47 and CD24, have been identified which allow cancer cells to avoid destruction by macrophages and other myeloid cells of the innate immune system. Restoring myeloid cell function has the potential to increase anti-tumor immunity by activating both innate and adaptive immune cells.

Siglec-10 is a checkpoint receptor selectively expressed on tumor associated macrophages (TAMs) and dendritic cells (DCs). It functions as an inhibitory receptor through interaction with multiple ligands, including the ‘don’t eat me’ signal CD24 as well as CD52 and VAP-1. Siglec-10 activation induces immunosuppression and promotes tumor immune escape through interaction with CD24. Similarly, CD52 has been shown to induce inhibition via Siglec-10, indicating that Siglec-10 functions as an inhibitory receptor through multiple ligands. Siglec-10 is elevated in multiple tumor types and increased expression has been inversely correlated with patient survival in multiple solid tumors, suggesting that Siglec-10 may play a role in tumor evasion. 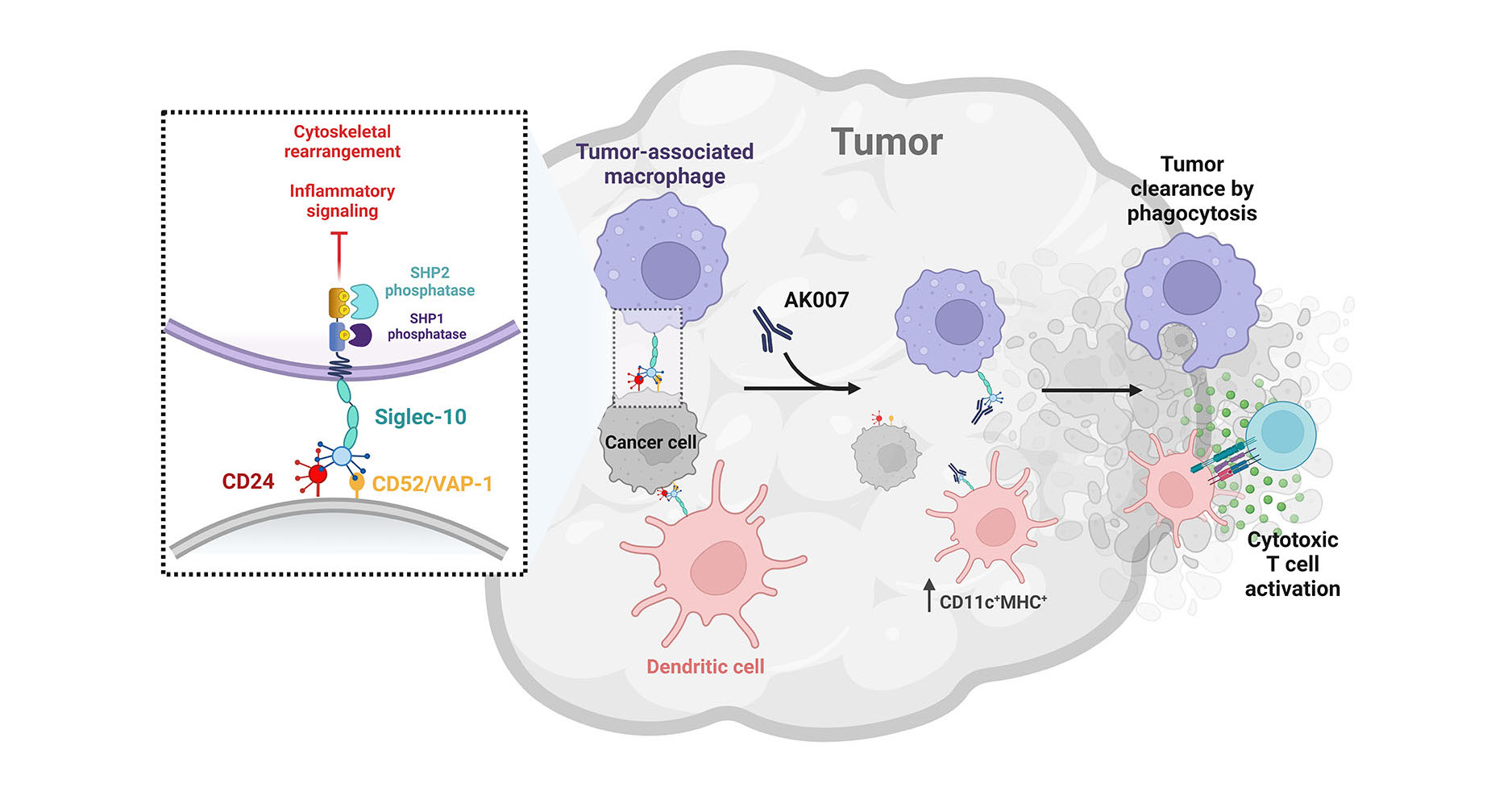 AK007 is a humanized Siglec-10 antagonist antibody designed to block Siglec-10 interaction with all known ligands (CD24, CD52, and VAP-1). Preclinical studies have demonstrated that monotherapy treatment with a Siglec-10 antagonist antibody inhibited tumor growth in a syngeneic colon adenocarcinoma model in Siglec-10 transgenic mice. Importantly, this reduced tumor growth was associated with an expansion and activation of TAMs, DCs, and T lymphocytes in the tumor. By targeting Siglec-10, AK007 has the potential to reverse myeloid suppression and promote anti-tumor immunity by directly blocking the checkpoint receptor irrespective of individual ligand interaction.